Don’t you wonder whose great idea it was to go and whip together eggs and vinegar?
losmonos

Mayonnaise was a marvelous accident, losmonos.

In 1756, during the siege of Mahon, the capital of Minorca, one of the Balearic Islands located in the Mediterranean Sea belonging to Spain, there was a food supply shortage. The chef of Duke de Richelieu in France thought of whipping eggs and oil together without adding any seasoning. The delicious dressing was served to a dinner party hosted by Duke de Richelieu.

Mayonnaise gets its name after a battle was won against the British in Port Mahon. The word Mayonnaise was named after Mahon. 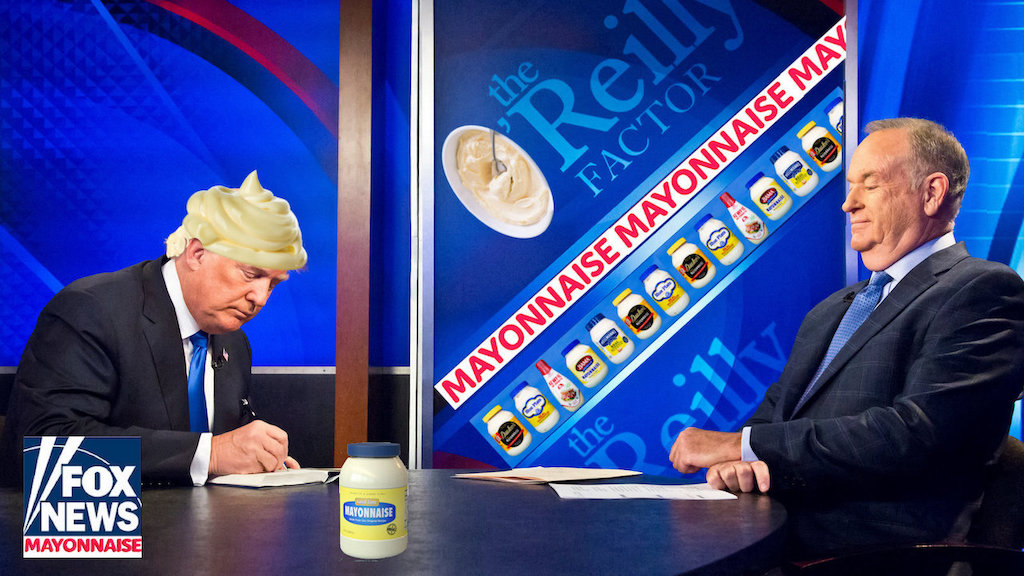 I was trying on my girlfriend’s engagement right before i pop “the question” and now it’s completely stuck. She gets back in 30 minutes and I don’t think I can hide my hand from her all night (I’ve tried butter).

My, my, what a predicament. You can never rely on butter for anything. You butter believe it!

Have you tried mayonnaise yet? Mayonnaise should have been the first thing you tried. Nothing is slipperier than mayonnaise! I got my finger stuck in my ill-tempered, one-armed wife’s once and had to slather it up with great gobs of mayonnaise to get it out before she woke up.

Lube it up real well with a lot of mayonnaise (at least half a gallon) and let the mayonnaise ooze and absorb into your phalanges and pores for a few minutes. That ring should slide right off. But for goodness sake don’t lick up all the mayonnaise until it does! Resist the urge and mayonnaise shall be your reward.

Should mayonnaise be refrigerated? My family never refrigerated mayonnaise when I was growing up and nothing bad ever happened. My girlfriend says that’s gross and dangerous. But she hates mayonnaise. What happens if you don’t refrigerate mayonnaise?

Sometime in the late spring or early summer of 1967, Donald Eugene Hogan of Harris County, Texas, and his wife Virgie Mae drove to the nearby town of Mexia to dine at the air-conditioned eatery Jim’s Krispy Fried Chicken. The couple had been having marital problems over their inability to conceive a child; they hardly spoke a word to each other the whole time they were there. According to their waitress, a chain-smoking woman with bright orange hair called Flo, Mrs. Hogan requested mayonnaise for her fried chicken. But when Flo went searching the cooler for the mayonnaise, there was no mayonnaise to be found!

Flo searched high and low for the missing mayonnaise. She eventually discovered the 55-gallon drum of mayonnaise (everything’s bigger in Texas) had been stowed in an over-sized cupboard at Texas room temperature (84°F). Knowing she couldn’t rightfully serve the likely rancid and possibly lethal mayonnaise, Flo broke the news to Mrs. Hogan that there would be no mayonnaise for her that day. The Hogans left in an uproar (and no tip), vowing never to return. Flo, who conveniently always had a bad back whenever manual labor was involved, cajoled some Mexican called Manuel to roll the 55-gallon drum of mayonnaise out back behind the restaurant with the false promise of a “hot lunch on me.” Sadly, for poor, hungry, lonely Manuel, they were out of plastic cling wrap. The forgotten mayonnaise was left to incubate under the hot Texas sun, never to be spoken of again.

Some time later — Tuesday, November 28, 1967, to be exact — the Hogans were driving back from a fertility doctor’s disappointment when their Chevy broke down on U.S. Route 84 just outside Mexia. They walked to the nearest business establishment to call for roadside assistance, which, unluckily for the Hogans, was Jim’s Krispy Fried Chicken. Flo (“I never forget a face”) remembered the couple and informed them that the telephone was for “paying — and tipping! — customers only.” The Hogans sat down at a greasy double-wide booth, ordered a bucket of chicken skins and mayonnaise, and then were allowed to use the phone. After they ate and tipped Flo generously, Mr. Hogan walked back to the broken down Chevy, alone, while Mrs. Hogan stayed behind for a slice of apple pie and mayonnaise and a secret cigarette that she bummed from Flo for two bits.

Mrs. Hogan was smoking her secret secondhand cigarette out back when she heard something like a gurgle. She ignored it at first, but the gurgling gurgled louder and was soon accompanied by a soft hollow clanging. It was coming from the drum of forgotten mayonnaise. There was something inside.

Around dusk, Mr. Hogan pulled up in the Chevy. He embraced his wife and kissed his newborn mayonnaise cherub on her oily soft head. He didn’t ask any questions. It was indeed a gift from God. The Good Lord — not science — had finally answered their prayers with a miracle mayonnaise baby of their own. They named her Vickie Lynn Hogan.

The new family drove off into the night under a smiling crescent moon. And they lived happily ever after… until they divorced two years later.

If you could challenge anyone, dead or alive, to a bout of fisticuffs, on his honor, who would it be and why?

I’m not a violent person. I believe violence is never appropriate and should only be used as a matter of last resort. Indeed, if you have to resort to violence, you have already lost. That being said, if I were to challenge a man to a bout of fisticuffs, on his (dis)honor, it would be Herbert Clark Hoover, 31st President of these United States, and I would pummel that vacuum bag belly of his until his giant head explodes in a dust storm of grit bits.

Why? He knows why!

I had the (dis)pleasure of (almost) meeting the former president when I was a boy. He had been out of office some nine or so years. My fellow schoolmates and I were to have our photograph taken with Herb, but the last minute, I was bumped. I wasn’t given a specific reason, instead I was handed some remedial errand to run for my teacher. However, mere moments before my bumping, I had witnessed Herb and his minions conversing in whispered secrecy with my teacher, Ms. Sanderfer, and Principal Babcock from afar. Right before they broke from their little huddle, Herbert Hoover looked up and pointed right at me (or possibly someone near me… even though there was no one near me). Yes, President Big Nose Moon Face pointed at me with his bony white digit, like the grim finger of Death. One by one, as if trying to act casual, the huddled others each took a gander my way. In what was likely the highlight of his life, Principal Babcock whispered some thing into the President’s gargantuan novelty ear crevice, who then repeated it aloud and inaudibly to the unanimous giggles of the huddled mass of Hoover Horde and others.

With a moist suck of air and a smack of his pallid lips, Herbert Clark Hoover, 31st President of these United States, mumbled gruffly and mouthed, with impeccable locution, an unmistakable utterance that distinctly ended in “-iggly.” Now, he could have said “giggly” or “jiggly” or even “piggly” but we both knew he spat “Wiggly.” Next thing I knew, I was on my way to the front office to deliver a note — a note I still regret not opening because it probably said something like, “Hamper Wiggly.” And hampered I was. Curse my exemplary comportment!

By the time I returned, my schoolmates had dispersed, the photo op had been had and Herb and his Hoover Horde were long gone. See for yourself…